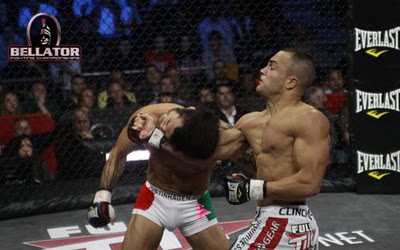 Bellator and Eddie Alvarez have likely surprised more than a few people throughout the MMA industry today, as the promotion has announced that the former lightweight champ will rematch Michael Chandler on November 2nd, bringing an end to their lengthy and public legal battle. The bout, which will feature two of the world’s best lightweight fighters, will take place on Bellator’s first pay-per-view event.

“I still lose sleep over my loss to Chandler, and I want it off my record,” Alvarez said in  a press release from the promotion. “This was a long process, but at the end of the day I’m back with Bellator and I’m happy to get back in the cage. I really believe everything happens for a reason, and at the end of the day my family and I are happy, and I’m ready to get my belt back on November 2nd.”

Alvarez (24-3) concluded his previous contract with Bellator last October, by knocking out Patricky Freire in the first round. The highly regarded fighter was eventually offered a contract by the UFC, and Bellator countered as per it’s contractual right. A legal battle ensued as to whether Bellator had truly matched the UFC’s offer, however, and Alvarez has spent 2013 on the sidelines as a result. No terms of the fighter’s new agreement were disclosed in today’s official announcement.

The 29 year-old fought Chandler in November, 2011, and was eventually submitted by the reigning champion, in what was one of Bellator’s best fights to date.

“I’ve been cageside for more live fights than almost anyone on the planet,” Bellator CEO & Chairman Bjorn Rebney said. “Without question, Chandler vs. Alvarez was the best MMA fight I’ve ever seen. I’m excited to be able to deliver this rematch to MMA fans.  It’s been a long time coming and we’ve had to jump over a lot of hurdles to get this done, but from the day we announced our PPV I promised fans that this card was going to be the deepest we’ve ever done, and we are well on our way. This is just the start.”

“Without sounding too disrespectful, when I fought Eddie the first time in 2011, I didn’t even know what it meant to be an MMA fighter,” Chandler said. “Two years later, I’ve grown so much as a mixed martial artist, and there isn’t a doubt in my mind on November 2nd, my hand will be raised and the belt will be around my waist. I have full confidence that I can take this fight wherever I want, whenever I want because I didn’t even show much of my wrestling in that last fight and I was able to beat him just with my standup. My ground game has always been there, and I’ve taken my striking to a whole new level since the last time we met. I feel like I have more experience under my belt, I’m wiser, stronger, and have had so much time in the gym trying to become the best fighter I can be.”

Chandler (12-0) is coming off a first round knockout win over David Rickels on July 31st, and has gone 3-0 since facing Alvarez.