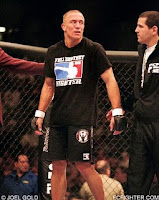 By FCF Staff
Just days removed from his dominant, unanimous decision win over Josh Koscheck at UFC 124, UFC Welterweight Champion Georges St. Pierre has been named Sportnet’s Canadian Athlete of the Year for the third year in a row. According to the Canadian sports television network, St. Pierre edged out National Hockey League superstar Sydney Crosby in the online fan voting, which determines each year’s winner.

“Winning the Rogers Sportsnet Canadian Athlete of the Year award for the third time means a lot to me,” St-Pierre was quoted saying on the official Sportsnet site. “This year there were a lot of nominees that I really respect, so I am honoured that the fans chose me. Thanks to all my fans for their support.”

With the win, St. Pierre moves ahead of basketball star Steve Nash in consecutive Canadian Athlete of the Year victories, who was awarded the Sportsnet honor in 2005 and 2006.