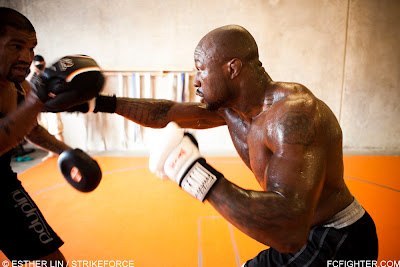 By FCF Staff   Houston’s Metro Fight Club hosted an open work-out yesterday in anticipation of Strikeforce’s upcoming event Saturday night, which will take place in that city’s Toyota Center. In attendance were light-heavyweight champion “King Mo” Lawal, KJ Noons, Artenas Young and Chad Robichaux, who are all scheduled to compete on the card.
Lawal (7-0) will face the highly regarded Rafael “Feijao” Cavalcante (9-2) in his first title defence, after cruising to a Unanimous Decision victory over Gegard Mousasi in April, to lay claim to the Strikeforce championship. When asked how he was feeling just a few days removed from the tilt, the champion stated:
“I’m feeling real good,” Lawal was quoted saying in a press release from the promotion. “I need to cut about eight pounds but that should be no problem. The weight is good and now it’s just about waiting for Saturday night. All the work has been done.”
And when asked if he grows tired of speaking to the press, Lawal reportedly answered:
“As long as they ask good questions,” he said. “It gets kind of old when you hear, ‘Do you think you’ll win?’ or ‘How are you feeling?’ Those are like one-word answers. I don’t like the obvious questions. I mean, if I didn’t think I could win the fight I wouldn’t have taken it.”
In another of the card’s main attractions, former Elite XC champion KJ Noons (9-2), will face veteran lightweight Jorge Gurgel (13-6). Noons feels ready for the fight:
“Did a little jump rope, a little stretch, a little pad work today,” Noons said. “It’s part of the job. I’m feeling great right now. My weight is on point and I just got my last workout in.”
“I’ll execute my game plan against Jorge. I’ll know a lot of people in the crowd so it should make it that much more fun.”
Some of the other bouts scheduled for the card include Ronaldo “Jacare” Souza vs. Tim Kennedy for the vacant Strikeforce middleweight title, Bobby Lashley vs. Chad Griggs, Chad Robichaux vs. Humberto DeLeon (5-3) and Artenas Young vs. Chad Cook.
“Strikeforce Houston” will be broadcast on Showtime.
posted by Full Contact Fighter @ 1:17 pm
Have a comment about this story? Please share with us by filling out the fields below.