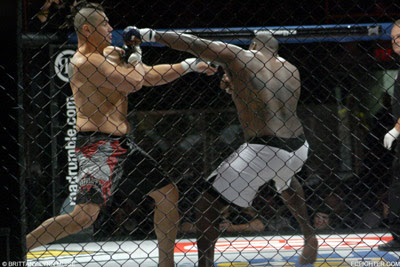 Here is a rundown of the action at last night’s W-1 card in Halifax,  Nova Scotia, which saw several notable MMA vets compete, including Brett Rogers, Ruben Villareal,  and Murilo “Ninja” Rua, amongst others.
By Alex Kielburger Photos by Brittany Lynn Muise
Brett “The Grim” Rogers Vs. Ruben “the Warpath” Villareal

RD 1. Rogers comes in with a steady stream of leg kicks that are finding its home on Villareals lead leg. As the two are exchanging shots Rogers lands a hard leg kick knocking Villareal to the ground, at which point The Grim gets on top of him and rains down punches. Villareal manages to play guard enough to avoid too much damage, at which point Rogers decides to let him up. Rogers and Villareal engage and get locked up in a clinch and utilize dirty boxing and some light knees until the end of the round. (Pictured above: Villareal (left) and Rogers exchanging)

RD2. As the buzzer sounds Rogers comes up with a big right but just misses, the Minnesota native manages another takedown and tries to work some ground n pound. Villareal is able to neutralize him with his guard and the Ref stands him up at 2:15 left in the round. Rogers continues to land a couple leg kicks and catches a single near the end of the round; ref stands them up with 40 seconds in the round.
RD3. The round starts and both fighters are looking worn; at 3:27 left in the fight Villareal attempts an inside leg kick that catches Rogers in the groin. Fight resumes and 30 seconds later Villareal lands another groin shot. Both exhausted, Rogers throws a big right misses and Villareal takes him down. They manage to stand again and fight ends in clinch position.
All judges score 29-28 for a unanimous win for Brett Rogers.

Roy Boughton Vs. Murilo “Ninja” Rua
RD1. Beginning of round Boughton attempts a takedown, Ninja stuffs as the Cesar Gracie student pull guard, Ninja attempts to pass guard but Boughton pushes him off and they’re back to their feet. Several take down attempts by Boughton but Ninja keeps on sprawling staying on top. At 1:35 left in the round Boughton attempts a standing Guillotine; Rua breaks free. 1:10 left in round Boughton manages a beautiful hip throw taking Ninja to the ground. Ninja attempts an ankle lock; Boughton breaks free and round ends.
RD2. Boughton manages a takedown early in the round and transitions from half guard to side control. Boughton tries to lock on an arm triangle but is unable to complete it, so he manages to stay on top and lands some vicious elbows. Ninja pushes him off, they stand and the Brazilian native attempts a takedown; is stuffed and Boughton gets top position and starts ground n pound. Ref stands them up to talk to Boughton. RD ends.

RD3. Boughton gets another take down as Ninja attempts a Guillotine but is unsuccessful. Boughton attempts a straight armbar but Ninja rolls out. Boughton manages to keep top position for most of the round.
All judges Score 30-27 for a unanimous win for Roy Boughton
Roger “the Hulk” Hollett Vs. Mychal Clark
RD1. Round starts and Hollett already is starting to find a home for his right hand. Hollett rocks Clark with a right hand as Clark stumbles, fighters push off and stand up continues. Clark is throwing kicks and Hollett’s staying in the pocket throwing some punches.
RD2. Clark lands some kicks; Hollett manages to take him to the ground, passes from half guard to side control then to mount. Hollett tries to utilize some ground n pound; Clark is holding him close. Ref stands them up with two minutes to go the work the clinch and Hollet stuffs a takedown.
RD3. Hollett stuffs a take down gets into side control and passes to mount; Clark turns Hollett gets his back at 2:33 left in the round. Clark turns into Hollett and they get back to standing at 1:50 left. Roger manages another takedown at 1:20 left in the round; round ends with Roger on top in North South position.
Judges score 1 rd 30-27  2 rd 29-28 3 rd 30-27; unanimous decision Roger Hollett
Sean Pierson Vs. Ricky Goodall
Sean Pierson wins TKO referee stoppage at 1:44 1st RD
Ryan Machan Vs. Matt MacGrath
Matt controls fight with constant takedowns all three rounds and wins the fight with a Unanimous decision 30-27.
Doug Evans Vs Tristan Johnson
Three round battle Doug evan gets his back late in round three taps Tristan Johnson with a rear naked choke at 1:55 left in third round.
Jason Mackay vs Musa Tolliver
Musa Tolliver gets consistent takedowns and rules the fight wins by unanimous decision 30-27.

Jeremy Hamilton vs Chris Johnson
Jeremy Hamilton wins via rear naked choke 2:56 into round 1
Tod Henry vs Jemiah Bernard
Jeremiah KO’s Tod Henry with a head kick 2:20 into round 1
Pat Schiling Vs Tom waters
Pat Schilling Taps Tom Waters with a knee var at 2:34 In Rd 1 for the submission
Michael Imperato Vs Jeff Black
Michael Imperato submits Jeff Black via armbar round 1, 4:36
posted by Full Contact Fighter @ 1:12 pm
Have a comment about this story? Please share with us by filling out the fields below.