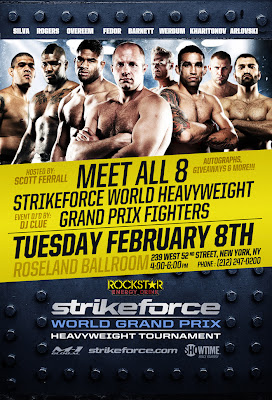 In an effort to further hype up the opening round of Strikeforce’s heavyweight grand-prix, this Saturday, the promotion has organized a “Fan Experience” in New York City Tuesday, where all eight competitors from the tourney will be on hand. The autograph session and public work-out will take place at the Roseland Ballroom (239 W. 52nd Street just West of Broadway, NYC) from 4-6PM EST.

The February 12th card will feature Emelianenko vs. Silva and Arlovski vs. Kharitonov in opening round action.