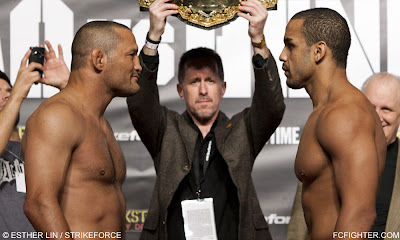 All of the competitors made weight yesterday for tonight’s “Feijao vs. Henderson” event in Columbus, Ohio, clearing the path for a Strikeforce card that will feature two title fights. At light-heavyweight, champion Rafael “Feijao” Henderson will take on decorated vet Dan Henderson, and women’s welterweight champion Marloes Coenen will look to defend against challenger Liz Carmouche. (Pictured: Henderson (left) and Feijao)

The event, which will be hosted by the Nationwide Arena, will be broadcast on Showtime.