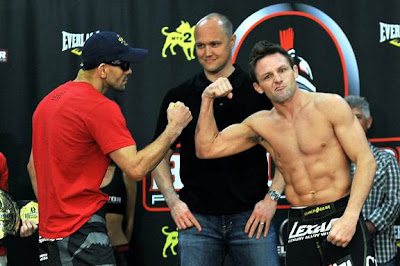 The Cocopah Resort and Casino in Somerton, AZ, will host Bellator’s latest offering tonight; an event which will feature the promotion’s featherweight champion Joe Warren facing Marcos Galvao, and bantamweight champ Zack Makovsky taking on Chad Robichaux. Both of the bouts are non-title affairs.(Pictured: Galvao (left) and Warren face off)

In addition, the card will include the semifinals of Bellator’s ongoing feather tourney, as Wilson Reis will meet Patricio Freire and Kenny Foster will fight Daniel Straus.

Here are the official weigh-in results for Bellator 41. The event will be broadcast live on MTV 2.