Bellator Season 2 Finalist “Pitbull” Freire Back for Another Run 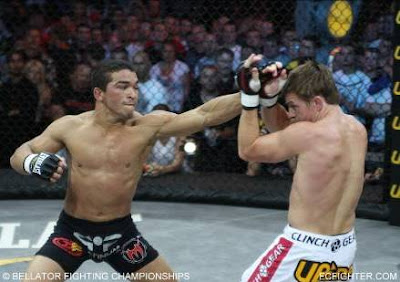 Patricio “Pitbull” Freire will look to secure another bout with the only man to defeat him to date, Bellator Featherweight Champion Joe Warren, as the promotion has confirmed that the 14-1 fighter will compete in this season’s 145lb. tournament. Freire is the latest fighter to be named to the competition, joining Wilson Reis, Daniel Straus, Georgi “Insane” Karakhanyan, Zac George, Kenny Foster, and Eric Larkin. (Pictured: Freire left)

“Patricio Pitbull is a great fighter. He was seconds away from beating one of the top two Featherweights on earth and that loss was his only defeat as a professional. I know that his sole focus is winning this tournament and earning the opportunity to avenge his loss to our Champion Joe Warren. He’s going to be fun to watch fight this season,” said Bellator Chairman and CEO Bjorn Rebney in the official announcement.

The 23 year-old Freire entered the 2010 tourney having gone 12-0 since he started fighting professionally in 2004. After submitting Will Romero, and then scoring a unanimous decision win over Wilson Reis, Freire lost by split decision to Warren in the tourney finals last June.

“I have no interest besides fighting as a professional,” said Freire, who is an experienced kickboxer and BJJ black belt. “It’s the only thing I really want to do. Every day in my life I am looking to overcome myself and evolve into a better fighter. I never believe that I am good enough. It’s all about improvement, every single day.”

“The time to show what I am all about is coming,” Freire added. “To win this tournament would mean a dream coming true. I can honestly say that I am more confident for this season than I was last year. Last year I got close, this year it’s mine!”

Bellator’s Season Four competition will get underway in March and will be broadcast live on MTV 2.