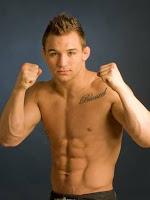 By FCF Staff  Photo courtesy Bellator Fighting Championship
Bellator Fighting Championship has confirmed that the promotion has signed undefeated lightweight Michael Chandler (3-0) to a contract. The former collegiate wrestler will make his promotional debut on September 30th. No opponent was announced.
Chandler last competed on May 15th at Strikeforce’s “”Heavy Artillery” event, and tapped out Sal Woods in the first round with a rear-naked-choke. Prior to that, Chandler stopped Richard Bouphanouvong in the second round, at a Strikeforce Challengers event last November.

“Michael Chandler is a great signing for us at 155,” Bellator Chairman and CEO Bjorn Rebney was quoted saying in a press release from the promotion. “He has unlimited potential in the sport, I’m excited to see him progress as a fighter under the Bellator banner.”

Chandler, who wrestled for the University of Missouri, currently trains out of Xtreme Couture in Las Vegas, Nevada.
posted by Full Contact Fighter @ 12:40 pm
Have a comment about this story? Please share with us by filling out the fields below.