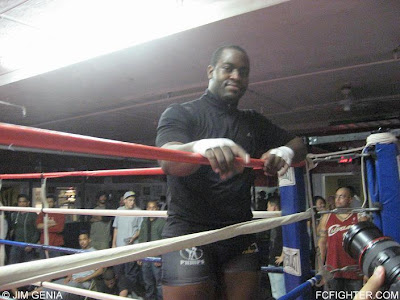 Shawn Obasi, New York’s infamous “Wing Chun Man”, has kept himself pretty busy lately.  For the past few months the he’s been training diligently for his professional MMA debut, and last week the hard-hitting kung fu stylist fought a challenge match against Internet personality “Bloodstain Lane” at a gym in Brooklyn.  FCF caught up with Obasi (pictured) to get the scoop on what the polarizing underground veteran has been up to.

“I’ve just been training super-duper hard, getting ready for my pro debut,” said Obasi, who splits his time between Grados Wing Chun and Alliance BJJ, and has gone from 278 pounds to 210.  “I’m going to be fighting for the light-heavyweight belt at Brick City Fighting Championships against Carlos Cline. He’s a Gracie fighter so I’m really looking forward to that.”

How did the Bloodstain Lane challenge match come about?  “He was on Facebook and I was on Facebook, and it’s kind of funny how that came about.  In my head I was saying, ‘Man, this guy talks so much shit about MMA fighters and how they lay-and-pray’, and he was talking about how he’d kick someone’s ass and do this and that.  And I was saying, ‘You know, I would like to fight this guy, but I don’t know how to go about it.’  Well, one day he left a post saying, ‘I’m going to be at Brooklyn Fight Factory sparring.  If any of you bozos want to come down and spar with me, come on out.’  I was like, oh wow.  This would be a great opportunity.  I left him a message asking what time, and all of sudden people on the thread started realizing who I was.  Then it became crazy.  It was on Twitter and all over the place, so we decided we were going to meet up and bang it out, and we did.”

The subsequent video of the match, which made the rounds on the Internet, show Bloodstain Lane taking the Wing Chun rep down repeatedly, but unable to do much while there.  It ends with Obasi snagging an armbar in the third round.  Obasi’s thoughts on the fight?

“It went okay.  I want people to understand it was just like a sparring match, not a full-contact thing.  I had spoken to Bloodstain Lane before, and he’d specifically asked me not to go hard, so I was going about 45 percent.  I won in the last round with an armbar, and I didn’t use any Wing Chun.  The reason why is, 1) I wasn’t really trying to hurt the guy, and 2) I wanted to test myself.  The way I was testing myself was by letting the guy put me into bad situations and letting the guy do what he wanted.”

“My teacher said something to me a while back and it stuck in my head.  He said, ‘Shawn, when you start to win fights by beating people effortlessly, that’s when you know you’ve reached a high-level of martial arts.’  When people see the video they can tell that I wasn’t aggressive.  I was pretty much relaxed.  And it makes me feel good that someone was going 100 percent and I was going 45 percent and I could still beat them.  But it wasn’t really I big deal.”

Will Obasi step into the cage against Cline with the same intensity?  “Absolutely not.  What you’re going to see is a culmination of that same theory of ‘effortlessness’, but you’ll also see emotional content.  You will know I’m fighting when you see the expressions on my face – I make crazy expressions on my face.  You can hear me raise my chi.  And that’s how you’ll know I’m fighting for real.  When I fight Carlos Cline I’m going to go at him with everything I got.  This is not a game, this is the professional level.  I’m getting paid for this.  I have expectations to live up to, and trust me when I tell you, when there’s a belt on the line, there’s no games.”

With no sanctioned matches to his name, Obasi finds himself in the unique position of fighting for a championship title in his pro debut – a feat due in no small part to his reputation as a tough fighter, as well as his ability to generate hype.  But the man whose YouTube highlight reel includes an emotional tirade at last year’s M-1 Global tryouts (“I’m a Wing Chun man!  I’ll be a Wing Chun man until the day I die!”) is taking it all in stride.  “It’s a really great feeling that I’m going to fight for the belt,” he says.  “And it’s crazy because once I do win, I will be Wing Chun’s first MMA champion.  It’s going to be really big.  I have a chance to make history.  Everything I’ve ever wanted, I have the opportunity to make it happen.”

Adds Obasi: “I feel really great.  I’m ready to go out and crush the guy.”