Catching Up with Roli Delgado 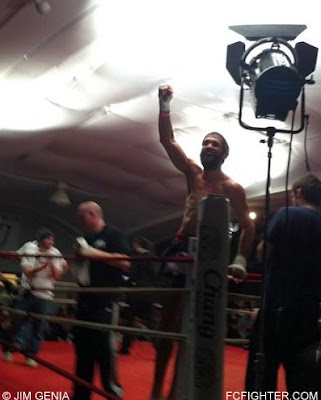 TUF 8 alum Roli Delgado strapped on the gloves this past weekend and threw down, and he wholloped his opponent for three rounds before earning a unanimous decision.  What’s most notable about that, though, is Delgado – considered by most to be more of a jiu-jitsu guy – employed only striking to snag the win.  Also, it was a pro Muay Thai match.  FCF caught up with the jiu-jitsu black belt while he was teaching a seminar at the C3 Athletics gym in Stamford, Connecticut, to get the scoop on what the UFC veteran has been up to.

Hailing from Little Rock, Arkansas, Delgado debuted as a lightweight on the Ultimate Fighter with a unanimous decision loss to George Roop, but was brought back to replace an injured fighter.  He subsequently lost a close split decision to controversial contestant Junie Browning, and the 29-year old followed that up with a submission win at the TUF 8 finale.  When last we saw him, Delgado was the victim of a first-round knockout at the hands of Andre Winner (at UFC 105), which, coupled with his UFC 99 loss to Paul Kelly, soon had Zuffa handing him his walking papers.

The tall, lanky Delgado returned to combat seven months later, submitting an opponent in under two minutes at a smaller event.  “I fought a really tough guy out of Oklahoma, a three-time state wrestling champion,” he says.  “A really, really tough guy.  And I did really well, I triangled him the first round.  Then I had trouble just getting fights.  I don’t know if it’s just people don’t want to fight me with my height at that weight, or what.”

Delgado, of course, did his best to remain active – which lead to his recent bout against pro fighter Turan Hasanov at New York City kickboxing promotion Friday Night Fights.  “I kind of had some downtime, and this opportunity to fight Muay Thai came up.  I wanted to do something, and I kind of always wanted to do a Muay Thai fight, so I decided to do one of those in between MMA fights.”

How did it go?  “I won a unanimous decision,” says Delgado.  “I fought a guy that was really respected down here and had a good amateur career, and now he’s a pro Muay Thai fighter.  In the Muay Thai scene, everyone was expecting him to walk through me, so on paper I was a really big underdog for this fight.  It was cool because it was a legit challenge, it wasn’t like I was just taking a Muay Thai fight with another MMA fighter or something.  This kid, in his interviews and stuff, was talking about how Muay Thai striking is so superior, that MMA guys don’t know how to do it and don’t know how to strike, and that it’s crazy for us to do it.  He definitely had that kind of elitist attitude about it, so it was really a great opportunity for me to take a tough fight out of my element.  It was also something I wanted to use as a tool to become a better MMA fighter.”  He adds: “It was kind of cool to go in there and just smoke the guy.  I won the unanimous decision, and he didn’t touch me.  I was just a better striker than him.  Before the fight they all had the elitist attitude, like an MMA guy would get killed in a Muay Thai fight.”

Delgado’s victory in the Muay Thai arena was no fluke, though.  It was, instead, the product of hard work and renewed focus.  “When I got done with the Ultimate Fighter it was obvious that I knew how to kickbox but I didn’t really train it.  I knew how to throw a punch, but I didn’t know all the nuances.  I could work the bag, but I was your typical low-level MMA guy.  It was apparent that I needed to learn how to box, so I started training at Straight Right Boxing, which is really good boxing gym in Little Rock.  I started training with them right after the show and I’ve been training with them ever since.  I haven’t really stopped.”

“Just the way my MMA fights went, no one could really see my progression,” says Delgado.  “That’s what was cool about this Muay Thai fight – I was able to show people that, hey, I know people think I still the same person I was when I fought Junie, but I really have been working on my boxing.”

What’s next for the TUF alum?  “I’m definitely trying to get back into the top MMA organization, so I’m going to pick up my fights and show people that I am working hard on the areas I needed to work on.”

However, with a walk-around weight of around 160 pounds, Delgado believes his return to the Octagon would likely not be at lightweight.  “Basically, I’m just a big 145er,” he says.  “I’m the tallest 145er in the world in MMA – I’m taller than everyone at 155 except for Corey Hill.  I really feel I could be a contender at 145.  I know I can.”

His thoughts on the UFC’s new 145-pound weight class?  “It’s an amazing division and it’s getting even better.  It’s going to be harder to break into it, but that’s my goal this year, and I think this Muay Thai fight was kind of a way for me to show people that I’ve been working really hard.”

If he keeps defeating Muay Thai fighters at their own game, this MMA fighter is certainly well on his way toward earning that respect.