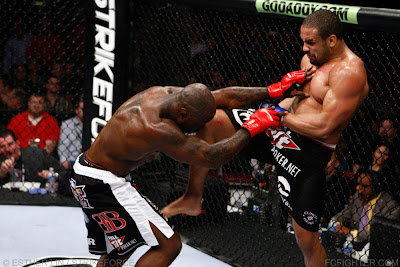 By Kelsey Mowatt   Rafael “”Feijao” Cavalcante became the first man to hand one of the sport’s fastest rising stars a loss tonight, as the Brazilian fighter stopped Muhammed “King Mo” Lawal at Houston’s Toyota Center, to take home the Strikeforce  light-heavyweight crown. In the bout’s opening two rounds Lawal largely seemed content to engage Cavalcante on his feet, and although the challenger was able to land some effective counter strikes, the renowned wrestler Lawal scored additional points with a couple of takedowns. (pictured above: Feijao landing a knee to Lawal)
In the third frame “Feijao” landed a hard knee to the jaw, and a follow up punch, which stunned the champion as he looked to close the distance. Although Lawal momentarily recovered and began working for the takedown, a barrage of elbows from Cavalcante to the side of Lawal’s head, soon prompted referee John McCarthy’s intervention.
In the card’s other title fight; Ronaldo “Jacare” Souza was awarded a Unanimous Decision victory over Tim Kennedy, to win the promotion’s vacant middleweight bout. Although the world class grappler was unable to take Kennedy to the mat (and in fact, it would be Kennedy who secured a couple of takedowns), Souza was more than comfortable striking with Kennedy, in what turned out to be largely a stand-up affair. While Kennedy was able to land more strikes throughout the bout, Souza inflicted more damage, as the decorated soldier’s face was left bloodied and bruised by the end of the competitive affair. While an elated Souza understandably embraced the judge’s decision afterwards, a disgruntled Kennedy vowed he would be back better than ever.
Jorge Gurgel honoured pre-fight statements that he would stand and trade with noted striker KJ Noons, and through the opening minutes of round one, the BJJ black belt faired rather well. As the round came to an end, however, Noons landed a pounding left hook just as the closing bell finished, dropping Gurgel to the mat.
As the second frame started it was obvious Gurgel was still not completely recovered and Noons sent the UFC vet crashing to the floor with a vicious one-two combo. As the referee hesitated to intervene Noons landed a knee to the head of the grounded Gurgel, which despite being illegal, had no impact on the bout being stopped in Noons favour.
In a heavyweight bout, Chad Griggs overcame the takedowns and ground-and-pound game of former WWE star Bobby Lashley, to pull off the upset win in round two. Lashley was able to take Griggs down in the bout’s opening round to score points with strikes from above, but on one occasion Griggs blasted the wrestler with an uppercut as he shot in, opening a large gash under Lashley’s left eye. As round two neared its end Lashley was noticeably fatigued, and while attempting another takedown, Griggs punished the heavyweight’s head with a steady stream of hammer fists. After the closing bell the referee determined Lashley could not continue.
Here are the results for “Strikeforce Houston”:
STRIKEFORCE World Light Heavyweight Championship
Rafael “Feijao” def. “King Mo” Lawal – KO (elbows) – Round 3 (1:14)
STRIKEFORCE World Middleweight Championship
Jacare Souza def. Tim Kennedy – Unanimous Decision – 49-46, 48-47 twice.
KJ Noons def. Jorge Gurgel – KO (strikes)– Round 2 (:19)
Chad Griggs def. Bobby Lashley – TKO – End of Round 2
NON-TELEVISED UNDERCARD
Daniel Cormier def. Jason Riley – Submission  (strikes) – Round 1 (1:02)
Andre Galvao – def. Jorge “Macaco” Patino – TKO (strikes) – Round 3 (2:45)
Vinicius “Draculino” Magalhaes – def. Rocky Long – Unanimous Decision – 29-28, 30-27, 30-27.
Adam Schindler def. Kier Gooch – Submission (Rear Naked Choke)
Reynaldo “The Truth” Trujillo def. Jose Santibanez – TKO (Strikes)
Chad “Robo” Robichaux def. Humberto DeLeon – Split Decision – 29-28 (Robichaux), 29-28 (DeLeon), 29-28 (Robichaux)
Artenas Young def. Chad Cook, – Unanimous decision – 30-27, 29-28, 30-27