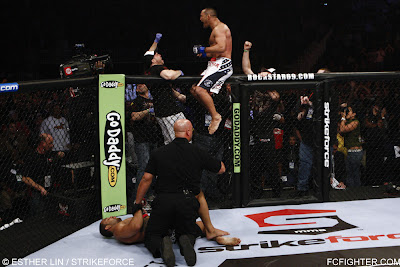 Dan Henderson added yet another championship to his resume tonight in Columbus, Ohio, as the decorated veteran stopped Rafael “Feijao” Cavalcante in the third round, to lay claim to the Strikeforce light-heavyweight crown.

After Henderson was sent stumbling to the mat in round one from a Cavalcante right hand, the Team Quest fighter began turning to his extensive wrestling abilities to work from the clinch and take the fight to the mat. Despite being taken down, however, Cavalcante negated the majority of Henderson’s attacks from above and even reversed positions on one occasion to wind up in the American’s guard.

In round three, Henderson once again came out firing, and just moments into the round he sent the Brazilian to the canvas with what appeared to be a grazing right. The former Pride champ quickly capitalized on the opportunity, and finished Cavalcante off with a series of punches from above, to become the new Strikeforce Light-Heavyweight Champion.

In the Showtime card’s other title fight, Marloes Coenen managed to survive a vicious ground-and-pound attack from Liz Carmouche, to complete one of the year’s more memorable come backs to date. Carmouche punished Coenen from the mount position throughout much of rounds two and three, but was unable to finish off the welterweight champ.

In round four, after Carmouche once again took Coenen to the mat, the Dutch veteran worked her way into a nicely executed triangle-choke, forcing her American opponent to tap out. Despite losing in the end, Carmouche’s stock has risen considerably, especially considering she took the fight on short notice to replace the injured Meisha Tate.

Here are the results from tonight’s Strikeforce card.