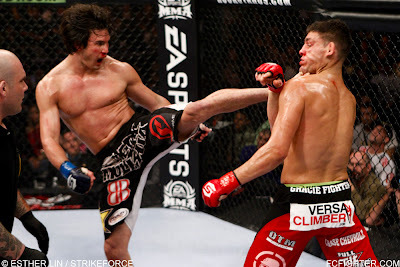 By Dustin Lee DePue
San Jose, CA—Nick Diaz got his revenge over K.J. Noons Saturday night, erasing the bitterness of a first round doctor stoppage loss suffered to Noons in 2007 and defending his 170 pound belt in front of a supportive crowd at the HP Pavilion.  In the nights other title fight, former 145 pound contender Marloes Coenen dropped down to 135 pound and defeated Sarah Kaufman to take the belt.(Pictured above: Noons (l) kicking Diaz)
In the main event, Nick Diaz beat K.J. Noons at his own game, out-punching the pro boxer turned mixed martial artist and earning a five-round unanimous decision victory.   Diaz scored early with a slick counter right cross that dropped Noons.  Diaz followed him to the ground, securing side control but was unable to set up any offense before Noons popped back to his feet.  Noons stole the momentum in the second round, opening a cut on Diaz’s right eye with a left hook early in the round.  Diaz seemed to lose his rhythm after the punch and spend the rest of the round on the losing end of the punching exchanges.
Unable to take Noons down, Diaz was forced to stand and trade with him for the rest of the fight.  Fortunately for Diaz, he was able to find his rhythm again in the third round, scoring repeatedly with the jab and cross and setting up several hooks to the body.  Diaz continued to beat Noons to the punch in the fourth round.  He scored with a clean one-two followed by a hook to the body and later with a knee to the head.  Noons answered with left hook and a right uppercut but Diaz was unfazed by either punch.  In the final round, Noons showed less urgency than one would have expected, seeming content to trade jabs with Diaz for the early part of the round.  He landed a left and right hook later in the round but it wasn’t enough to make an appreciable dent in the scorecards as Diaz won a unanimous decision by scores of 48-47, 49-47, 49-46.

Marloes Coenen won the women’s 135 pound title by submitting the previously undefeated Sarah Kaufman with an armbar midway through their five round fight.  Coenen worked her Thai boxing in the first round, landing low kicks from the outside and using her reach to snipe with sharp punches.  Kaufman smothered most of Coenen’s offense in the second round, clinching and keeping Coenen pressed against the cage for much of the round.  In the third round, Coenen scored a takedown early but was quickly reversed.  Inside of Coenen’s guard, Kaufman opened up with a flurry of punches and hammerfists, some of which landed.  Her aggression proved her undoing as Coenen was able to snatch up an arm and sink a tight armbar that forced the tapout at 1:59 of the third round.

Josh Thomson moved a step closer to a rubber match with Gilbert Melendez by defeating Gesias Cavalcante by unanimous decision.  Thomson was in trouble early in the fight after eating a right hook that buckled him and getting caught in an arm-in guillotine.  Cavalcante grimaced as he squeezed the choke for an extended period of time but Thomson was able to slip out and quickly turn the tide, finishing the first round with a tight arm-triangle choke latched onto Cavalcante.  Thomson scored a trip takedown in the second round and spent much of the round controlling Cavalcante from the top position.  In the final round, Cavalcante landed a knee to the head and scored a takedown into the mount position.  Thomson remained calm, working to halfguard and then rubber guard before escaping to his feet.  Cavalcante scored another takedown and landed some punches but it wasn’t enough as Thomson earned a unanimous decision by scores of 29-28, 29-28, 30-27.

Tyron Woodley improved to 9-0 with a TKO stoppage of Andre Galvao early in the first round.  Woodley hurt Galvao with a sharp right cross seconds into the fight, prompting Galvao to shoot in for the takedown.  Woodley easily kept the fight standing and tagged Galvao with a second sharp right cross that put his opponent on wobbly legs.  In survival mode, Galvao shot in for a takedown and ate a right hook coming in, prompting a referee stoppage at 1:48 of the first round.
Strikeforce Televised Results
Nick Diaz def K.J. Noons by Unanimous Decision(48-47, 49-47, 49-46)
Josh Thomson def J.Z. Cavalcante by Unanimous Decision (29-28, 29-28, 30-27)
Marloes Coenen def Sarah Kaufman by Armbar 1:59 Rd 3
Tyron Woodley def Andre Galvao by TKO (strikes) 1:48 Rd 1
posted by Full Contact Fighter @ 2:34 am
Have a comment about this story? Please share with us by filling out the fields below.