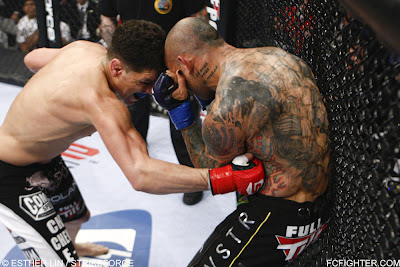 By Dustin Lee DePue
San Jose, CA—It was a good night for Strikeforce champions as both welterweight champion Nick Diaz and middleweight champion Ronaldo “Jacare” Souza submitted their opponents at the HP Pavilion tonight.  Also on the card, the number one BJJ competitor in the world Roger Gracie improved to 4-0 and former NFL player Herschel Walker provided more proof to naysayers that he is for real by stopping his opponent in the first round. (Pictured: Diaz digging a right into Cyborg)
In the main event, Diaz took the best that Evangelista “Cyborg” Santos could offer on the feet for two rounds before scoring a submission with only seconds remaining in the round.  Santos started strong, ripping Diaz with kicks to the inside of Diaz’s lead leg.  Despite grimacing several times, Diaz was content to eat the kicks while taunting his opponent.  Diaz lost more ground as Santos started zeroing in with his powerful punches, landing several good shots before Diaz decided to mount  any offense of his own.  Midway through the round, Diaz took control as he started to chip away at Santos with his trademark jab and cross.  He rocked Santos with a wicked left cross to the chin that had Santos in trouble and followed up with a flurry to the body and head but Santos was able to survive the round.
In the second round, Diaz again was content to take some punishment as he made little effort to avoid Santos’s hard low kicks.  As the round wore on, both fighters landed a few punches but it was Santos with his leg kicks who was winning the round.  With less than a minute remaining, Santos took Diaz to the mat, a decision that would prove to be his undoing.  Diaz quickly latched on an arm bar, rolling Santos over before hyperextending his arm and getting the tapout with just ten seconds left in the round.

Jacare’s world class ground game bested Robbie Lawler’s heavy hands in a clash of styles that ended with  Lawler tapping out to a rear naked choke.  Jacare took Lawler down early and spent several minutes controlling him from side control and north south as he looked to set up an armbar.  Lawler brought the fight back to his world by working to his feet and wasted little time putting the pain on Jacare.   He hurt Jacare with a short hook to the temple and followed with a right hook that knocked Jacare down.  Lawler followed him to the mat but was unable to finish the champion.

It was as close to victory as Lawler would get as Jacare spent the next two rounds putting Lawler on the mat and working for submissions.  Credit goes to Lawler for escaping a pair of armbars from the BJJ wizard.  In the third round, Jacare found his submission.  After sweeping Lawler and taking his back, Jacare secured a body triangle and locked in a rear naked choke for the tap out.

Herschel Walker’s second foray into was a success as he pummeled Scott Carson en route to a TKO stoppage in the first round.  Carson drew first blood, clipping Walker with a head kick.  Walker wasted no time answering, dropping Carson with a left hook and working him over with strikes on the ground for several minutes.  The end came when Carson pushed Walker away and attempted to stand.  As he worked to his feet, Walker moved in and clocked him with a hard punch that dropped back onto his back.  Follow up punches forced the ref to step in and call the fight at 3:13 of the first round.

Roger Gracie notched his fourth victory in as many bouts with a submission over Trevor Prangley.  Gracie was patient on the feet, throwing a few jabs and landing knees from the clinch before switching gears and taking Prangley to the mat.  On the ground, there was little that Prangley could do as Gracie calmly worked his way to mount.  Prangley attempted to bridge off of the cage but Gracie countered and took his back where he locked on a body triangle before finishing Prangley with a rear naked choke.