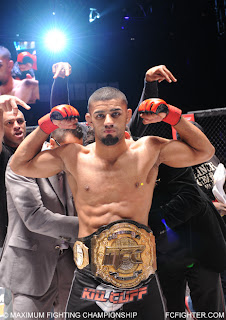 Despite signing with the Maximum Fighting Championship last year with a 15-4 record and possessing a reputation as a highly touted prospect, Douglas Lima was still an unfamiliar name to many throughout the MMA world. Now, after laying claim to the promotion’s welterweight title and then defending it in impressive fashion against Terry Martin this past weekend, the word is starting to get out on Lima’s flourishing career.

“It’s getting better now,” Lima told FCF, when asked if he’s being contacted more due to his recent successes. “People are starting to call me to talk about my fights. The MFC has been super important; they’ve really pushed my career where I needed it to be. Fighting on HDNet, beating three tough guys, it’s really what I needed to push my career even higher.”

Lima made his MFC debut last September, and immediately sent shockwaves throughout Canadian MMA , by tapping out former contender Ryan Ford in the second round. Just two months later at MFC 27, Lima battled through the refined wrestling and imposing top game of Jesse Juarez, and submitted the welterweight in the third round to become the MFC champ. While both victories were impressive and pivotal in furthering Lima’s career, this Saturday’s first round stoppage of UFC vet Terry Martin, may be the 23 year-old-fighter’s most noteworthy yet.

“It meant a lot to me,” said Lima while discussing his latest victory. “It shows that all the hard work I’ve been putting in is paying off. I trained really hard for that fight and I was really confident that I would get the win. I’m just really glad it turned out that way.”

“Ever since I signed to fight him I was hoping that it would push my career even higher,” Lima added. “Now I’m just going to sit back and see what happens next, but I’m sure it’s going to really put my name out there.”

Perhaps what made the win particularly memorable was that Lima utilized his striking, rather than his renowned submission game, to finish off the feared striker. Early on, Lima caught Martin with a hard right hook that sent the well traveled vet to the mat, before finishing him off with a series of follow up punches to secure his 18th pro win.

“Oh man it feels so good to show people what I can do with striking,” said Lima. “I don’t want them to think I’m just a jiu-jitsu guy. I’m really happy; people can see now that I can strike well you know?”

Now having begun his 2011 campaign with another win, to extend Lima’s winning streak to six, the American Top Team Atlanta fighter is hoping to compete again soon.

“I don’t know when I’m going to fight, but I could fight next week if I had to,” Lima said, when asked if he’s had any discussions about when he’ll return to the MFC for his next title defense. “I’m young, I didn’t get hurt, so the sooner the better.”

“I’d like to fight as much as I can, seven, eight times, if I could,” Lima added while talking about his hopes for 2011. “I’d fight every month but it’s not really easy to find fights. I just want to fight a lot and keep winning.”