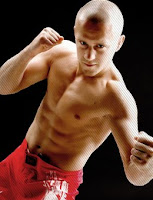 By Kelsey Mowatt Photo Courtesy Adrenaline Training Center
Following his dramatic TKO win over Yves Jabouin at WEC 49 in June, Mark “The Machine” Hominick was quick to play matchmaker in his post fight interview, asking for a bout with fellow featherweight Leonard Garcia. It’s a fight that evidently neither the WEC nor Garcia could say no to, as the two aggressive fighters will square off September 30th, in Broomfield, Colorado.
“As soon as I asked for the fight after the last WEC in the interview, Garcia called the matchmaker for the WEC and told him to make it happen,” Hominick told FCF. “This is a fight that makes sense since we both came off big wins and are fighters who like to stand and trade, so it was a fight that will be enjoyable for the fans and important for the rankings in the 145 pound division.”
Hominick (18-8) has won back-to-back bouts in the WEC since he returned to the promotion earlier this year, tapping out Brian Caraway with a first round triangle-choke-armbar in January, before his aforementioned victory over Jabouin. Garcia (14-5-1) is also coming off a memorable win; in April the UFC vet earned a Split Decision victory over Chan Sung Jung, in what was one of the promotion’s most entertaining fights to date.
“Leonard comes from a smart camp with Greg Jackson and I would imagine that they have a good game plan to attempt to execute, but I am ready for wherever the fight goes,” said Hominick when asked to assess the abilities of his next opponent. “Every fighter in the WEC is dangerous all around and I expect that Leonard will come with everything except the kitchen sink in this one.”

“I have split my time between Adrenaline Training Center in Canada and Tapout Team Tompkins in Vegas with Shawn Tompkins,” Hominick added while discussing his training camp for the September 30th fight. “Feeling great, coming up on 2 weeks out and feeling stronger day by day. This training camp has went smoothly and I have pushed myself since I know it is going to be a war.”

Heading into the bout Hominick has won three straight fights and is 4-1 in his last five, after a disappointing first run with the WEC, where he lost bouts to Josh Grispi and Rani Yahya. While a win over Garcia would likely position the London, Ontario fighter in the featherweight title mix, Hominick isn’t looking that far ahead.

“I am just focusing on Garcia right now, but I am the strongest both mentally and physically I have ever been in my entire career, so whoever is in front of me is who I am taking out.”

The upcoming September 30th WEC will be headlined by a featherweight title fight between champion Jose Aldo and challenger Manny Gamburyan, and will also feature a rematch between lightweight contenders Jamie Varner and Donald Cerrone.
posted by Full Contact Fighter @ 12:32 pm
Have a comment about this story? Please share with us by filling out the fields below.