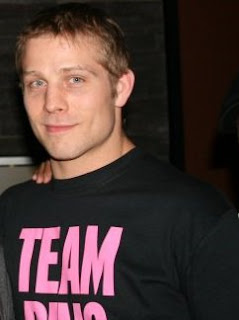 By Kelsey Mowatt Photo Courtesy Nick Ring
2010 began with much promise for Nick Ring; after being a well known commodity in Canadian MMA circles for years, the middleweight introduced himself to much of the wider world, by earning a spot on the eleventh season of “The Ultimate Fighter.” Despite scoring wins over Woody Wetherby and the show’s eventual winner, Court McGee, however, not only did Ring’s run on the show come to a premature end, so did his 2010 fighting campaign.
“Rehab on my knee has been going good,” Ring told FCF recently, when asked to provide an update on the injury which forced his removal from the TUF tourney. “I am 5 months out of my surgery and I am looking forward to getting back to training; I have not even trained martial arts since February. My injury was a full-rupture of my anterior cruciate ligament (ACL), and yes an ACL rupture is a serious injury.  The ACL is the ligament that connects the back of a person’s femur bone to the front of their tibia bone, it is one of the ligaments that allows a person to twist and pivot and without it you can’t fight, despite what they try to say on TV – it is every bit as serious as having a broken bone.”
“I would like to be back to competing in 2011, which sounds kind of vague and far off right now at this point, but I’m old and us old people are really slow and our thinking is muddy,” the charismatic fighter added.  “So I’m afraid that this is the best answer you will get from me at this point until I gets my prescriptions filled up.”
As Ring revealed on the television program, the undefeated fighter has had knee injuries before, which has prevented him from competing more often in recent years. As a result, Ring decided to withdraw from the competition, in an effort to prolong a MMA career which dates back to 2002. In the episode where Ring announced his decision to exit from the tourney, it appeared to some, that UFC President Dana White was disappointed in his decision.

“I think that Dana was probably disappointed with my decision but I knew he understood, it was made to look alot more harsh on T.V. than it actually was though,” Ring noted. “When Dana and I were talking outside he was being compassionate with me and I didn’t feel like we were having a bad talk – I think that he just wanted to know if I was in or I was out.  It was an unfortunate situation for me and it was a hard decision to make but trying to fight in that condition was not going to end in anything good – I knew that if I took that fight with Court, it would have been my last one ever so I pulled out of the competition so I could live to fight another day.  As shitty as it was for me at the time, I knew that pulling-out was the only choice I really had and I am happy to say that because of that decision I will be back to fighting again in the future.  I haven’t talked to Dana since the show but I’m sure we will cross paths again at some point, I am far from done.”

While Ring was picked first overall by coach Tito Ortiz, after stopping Wetherby to earn a spot in the TUF 11 house, the Bellator vet doesn’t feel like he was able to fully demonstrate his capabilities as a fighter. Ring was awarded a Majority Decision win over McGee in episode six, but was forced to withdraw before their quarterfinals rematch took place (McGee had been brought back into the tourney as a replacement for the injured Rich Attonito).
“Looking back on the fights I had in season 11, I would not say I was really fighting to my full capability but oh well – too bad, so sad,” Ring noted. “I have been a competitor for a long time and I realize that I am going to have both good days and bad days, the TUF show is just a small little micro-snippet of my 15 years as a fighter and I’m not really too focused on it – it was merely a short period of my career.  Right now though, it is time for me to move forward and I’m just excited to start fighting again. The time I’ve taken away from being a competitor has been fun and it has actually been really rejuvenating, but I am going to comeback more focused than I ever have been before.  Sometimes it just takes some serious time off martial arts to make you realize that you would just rather be hitting someone in the face…If I have learned anything in my time off it’s that talking to people is way over-rated.”
And in terms of how Ring feels he was portrayed on TUF?
“Yes I watched the TUF season I was on and I thought they were relatively accurate in their portrayal of me despite making me look like a raging homosexual…” Ring said. “Either way, the show was still a good chance for us to showcase ours skill and let people laugh at our idiosyncrasies – it was all in good humour. I had a lot of fun being there and while I may not have walked out looking like the most macho guy in house I would still say that I left a good impression on the viewers.  My friends back home still laugh at me about the show, but it doesn’t bother me one bit – I was honored to be a part of it.”
“Life in Calgary “post TUF” is pretty much the same as it was “pre TUF”. I’m still driving a beat-up 1989 Saab 9000 turbo whose lights don’t work and stalls like crazy, my bosses still yell at me for being late for work, I still tell stories to friends about homeless people that I have fought with and almost won against, and girls still give me dirty looks for being creepy,” the often joking Ring added, when asked if he gets more recognized now on account of his UFC experience. “Things have been very much the same in my life but the only thing that has changed is that people recognize me way more than they used to, and some of those people even gave me a cool nickname…  “Hey Faggot”.”
posted by Full Contact Fighter @ 10:00 am
Have a comment about this story? Please share with us by filling out the fields below.