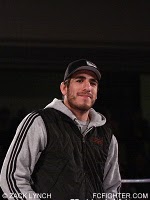 By FCF Staff
Perennial lightweight contender Kenny Florian has confirmed on his official website, that he will not face Evan Dunham as originally scheduled on January 22nd, due to a knee injury he incurred while training. The bout had been pencilled in as the main event for the upcoming “Fight for the Troops” card, which will take place at Fort Hood in Texas.
Here is part of the statement that appeared on Florian’s website earlier today.
It is with deep regret that I will not be able to compete in my scheduled fight against Evan Dunham on January 22nd, due to a knee injury I sustained during training this morning. Although I have not had an MRI as of yet; the doctors are cautiously optimistic that it will not require surgery.

Florian is coming off a unanimous decision loss to Gray Maynard in August, after earning back-to-back victories over Clay Guida and Takanori Gomi. Florian went on to say that he is “determined to return to the octagon in the first half on 2011.”

Dunham (11-1) was defeated for the first time in his pro career in September, when he dropped a tighlty contested split decision to former champ Sean Sherk. Prior to the loss Dunham had won four straight in the Octagon.

The UFC has not yet made an official announcement regarding Florian’s injury.