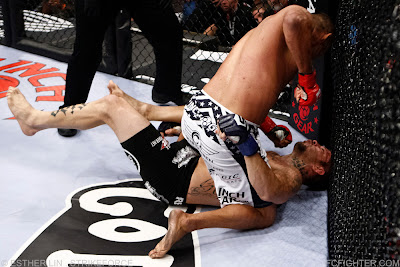 St. Louis, MO—Strikeforce closed out 2010 with a fireworks show as four fighters on the televised card ended their fights in brutal and exciting fashion.  Dan Henderson was among the big winners, stopping Renato “Babalu” Sobral with a thrilling KO in their rematch and putting himself into the 205 pound title picture.  Paul Daley was the second former UFC fighter to show off his spectacular punching power as he decimated Scott Smith with a perfect left hook to earn his first Strikeforce victory. (Pictured: Henderson knocking out Sobral)

In the main event, Henderson pressured Sobral early, throwing a flurry of punches and catching him with a short left hook that had Sobral scrambling.  Henderson ended up on top of Sobral in half guard before standing up and raining down a pair of absolute bombs that knocked Babalu cross-eyed, earning Henderson the knockout just inside of the two minute mark.

Paul Daley started off his career in Strikeforce with one of the best knockouts of the year against Scott Smith.  Both fighters possess serious punching power but it was Daley’s beautiful technique that made the difference.  He ripped Smith with a pair of hard low kicks before dropping him with a right straight  early in the round.  Daley moved in to finish but seeing that Smith still had something left, he opted to let him stand up.  Back on the feet, Daley continued to punish Smith, scoring with a pair of left hooks.  Taking the worst of it, Smith shot forward looking to land a power punch of his own.  As Smith moved forward, he ran smack into a counter left hook that caught him on the chin and knocked him out, leaving him face first on the mat at 2:09 of the first round.

Robbie Lawler ended Matt Lindland’s night in brutal fashion, knocking the former UFC middleweight champion out in under a minute.  Lindland chose to stand with Lawler and the early signs were not good for him as he ate a pair of glancing left hooks before an overhand right dropped him hard.  Lawler went for the kill, dropping a hard left hand on Lindland’s chin that knocked him out cold just fifty seconds into the fight.

Antonio Silva weathered an early storm from late replacement Mike Kyle before recovering and using his powerful ground and pound to knock Kyle unconscious.  Kyle dropped Silva with a sharp right cross early in the fight but was unable to finish the big Brazilian despite spending the entire round working Silva over with punches and hammerfists on the ground.

The second round belonged to Silva as he followed up a solid right cross with a takedown.  From here, Silva’s fifty plus pound weight advantage and BJJ prowess were too much for Kyle to overcome.  Silva passed from position to position with ease, punching his way to from side control to north south where he looked to set up a kimura.  When Kyle tried to stand, Silva locked in a D’Arce choke that looked tight.  Kyle escaped but was again on his back, where Silva quickly worked to the full mount and finished the fight by dropping some devastating punches that knocked Kyle out at 2:49 of the second round.

Benji Radach took his fight with Ovince Saint Preux on short notice because he wanted to keep his name out there, unfortunately for him, he’ll be remembered for the wrong reasons as he lost a fairly one-sided decision to Saint Preux.  Saint Preux battered him on the feet, knocking him down several times throughout the fight and spending a large part of the fight on Radach’s back hitting him with punches and hammerfists.  Radach landed an overhand right in the third round that was promising but he didn’t enough in the tank to capitalize.  Saint Preux showed improving wrestling and serious power as he cruised to a unanimous decision by scores of 30-27, 30-26, 30-25.