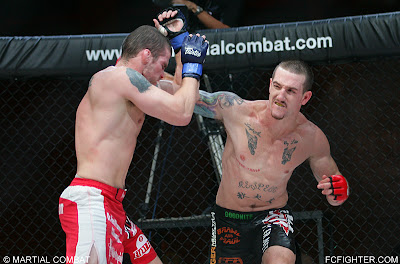 By FCF Staff  Photos Courtesy Martial Combat   Joe Ray extended his undefeated record to 4-0 last night in Sentosa, Singapore, by knocking out UFC veteran Chad Reiner in the third round with right hand. The KO win was Ray’s second under the Martial Combat banner; in June, the welterweight knocked out Zorobabel Moreira in just 14 seconds. Reiner, who was coming off a submission win over Curtis Johnson in April, see his record fall to 25-12. (Picture above: Ray (R) throwing a right hand at Reiner)
“I know I have that one punch knock-out power in me and it was just a matter of time before it came,” Ray was quoted saying in a press release from the promotion. “Like they say, ‘if you’ve got it, use it’. Reiner’s a tough fighter, he isn’t afraid to engage and he gave as good as he got tonight.”
Here are the results for Martial Combat 7:
Chavalit Sityodtong def. Ben Nguyen by TKO (Punches) R2  2:20
Angelito Manguray def. Shane Wiggand by Submission (Punches) R1  2:25
Vuyisile Colossa def. Alex Niu by KO (Punches) R2 2:57
Nick Mellor def. Victor Wang by TKO (Punches) R2  4:38
Joe Ray def. Chad Reiner by KO (Punch) R3 2.11
Martial Combat 8 takes place tomorrow at the Resorts World Sentosa in Singapore, and will feature a Superfight Championship bout between Doo Jae Jung and Sabah Fadai, as well as, Ole Laursen vs. Nicolas Leconte.
posted by Full Contact Fighter @ 4:58 pm
Have a comment about this story? Please share with us by filling out the fields below.