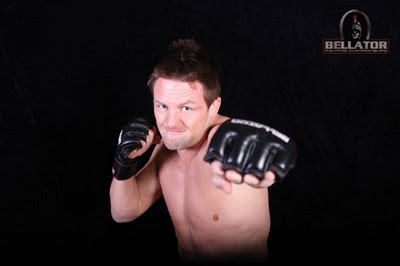 By FCF Staff   Photo Courtesy Bellator Fighting Championships
Joe Warren continues to demonstrate that he is destined to do big things in MMA, as the former Greco-Roman wrestling champ laid claim to Bellator’s featherweight title last night in San Antonio, by knocking out Joe Soto in the second round. After being dominated by Soto’s striking in the opening five minutes, Warren came out firing in the second, and stunned the former champion with an overhand right. Although Soto managed to work his way back to his feet out from a vicious barrage of hammer fists, Warren (pictured above) soon closed the deal with a thumping knee to the head and follow up strikes.
“I told you I was going to win,” Warren was quoted saying in a press release from the promotion. “I came in here and got the job done. I’m super happy to be a World Champion. This is the first time I’ve knocked someone out – there is a lot more to come.”
“If you saw Joe Warren’s fight with Patricio Pitbull in Season 2, most people would not of  made it out of that first round, but Warren has that immeasurable heart that allows him to push forward,” Bellator CEO Bjorn Rebney said after. “Tonight was no different.  When I sat down with Warren a year ago he told me that he was willing to die in there to get that title. Most people just say that, but when he says it you believe it.  What a great performance. We have a tremendously talented and rapidly evolving featherweight champion.”
With the win Warren’s record improves to 6-1, while in experiencing defeat for the first time, Soto’s drops to 9-1.

In action from the promotion’s ongoing bantamweight tourney, Zach Makovsky, Ed West and Ulysses Gomez all advanced to the semi-finals with decision victories.