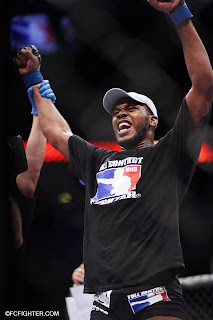 By FCF Staff
Jon “Bones” Jones took another step towards fighting one of the Ultimate Fighting Championship’s leading light-heavyweights last night in San Diego, California, as the rising star had little difficulties stopping accomplished veteran Vladimir Matyushenko in the first round. After promptly sweeping the former IFL champ to the Octagon floor, Jones soon had Matyushenko trapped in the crucifix position, and forced referee Herb Dean to stop the bout after landing a series of brutal elbow strikes.

Here are the full results from last night’s card: