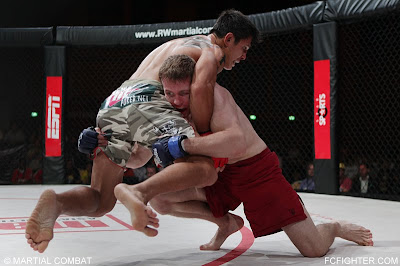 By FCF Staff    The Sentosa Resorts World in Singapore hosted a Martial Combat event for the second night in row, as the promotion’s eighth card saw Ole Laursen record his fourth win a row, by working to a Majority Decision victory over Nick LeConte. According to a post-fight, press release from the promotion, LeConte was deducted a point in the first round, due to illegally striking Laursen with a knee to the head while he was on the ground. In what was reportedly a close bout, the deduction played a key role in the fight’s outcome.
“Tonight’s fight was so close that it could have gone either way,” Laursen was quoted saying. “The point deduction made a big difference because Leconte did a great job, and on any other day, he would have won it. He was much better than I was today; he did knee me but that’s just the rules.”
In another of the card’s attractions, Sabdah Fadai extended his record to 6-1 with a win over Doo Jae Jung, after the South Korean fighter incurred a wrist injury in the third round and could not continue.
“He is just such a great and determined fighter,” Fadia said. “I threw everything I had at him and I still couldn’t get a lock on him. The difference tonight was desire, focus and dedication, traits that Filipino fighters are well-known for.”
Here are the complete results for Martial Combat 8:
Brayden Summers def. Bian Xiao Long by Submission (Guillotine Choke) R2 3:46
Nathan Fredericks def. Kumar Subramaniam by KO (Slam) R1 0:16
Vaughn Anderson def. Hyung Woo Kim by TKO (Strikes) R2 3:33
Ole Laursen def. Nick LeConte by Decision (Majority) 3 5:00
Sabah Fadai def. Doo Jae Jung by TKO (Wrist Injury) R3 0:58
posted by Full Contact Fighter @ 3:54 pm
Have a comment about this story? Please share with us by filling out the fields below.