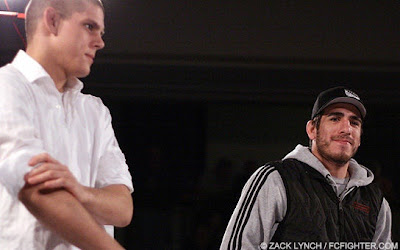 Massachusetts fighter will indeed face Gabe Ruediger, and not Terry Etim as originally scheduled, August 28th at UFC 118. The post, which is attributed to the 26 year-old-fighter, states that Lauzon received an email “yesterday” confirming that Etim is injured. As reported earlier, Ruediger had previously announced the change on his Twitter account.

After Lauzon stated that he “knew the replacement would never be even close” to Etim, here is some of what the veteran had to say about his new opponent Ruediger; a cast mate of Lauzon on the fifth season of “The Ultimate Fighter.”
“Before Gabe was casted out of the house, I trained with him a good amount and it went both ways. He caught me, I caught him. I think I got the best of him on the ground while he got the best of me on the feet.”
Lauzon (18-6) will head into UFC 118 having gone 3-2 in his last five fights, with losses coming against Kenny Florian and Sam Stout. During that stretch the lightweight has defeated Jeremy Stephens, Kyle Bradley and Jason Reinhardt.
Ruediger will make his Octagon return for the first time since September, 2006, when he was KO’d by Melvin Guillard. The soon to be 33 year-old-veteran has won 6 straight fights.
posted by Full Contact Fighter @ 4:14 pm
Have a comment about this story? Please share with us by filling out the fields below.