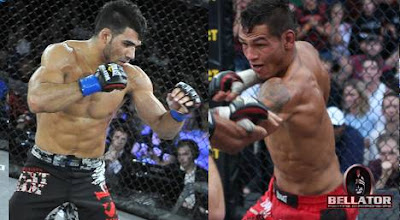 Bellator Fighting Championships has announced that the promotion’s former welterweight champ Lyman Good and Season 2 finalist Dan Hornbuckle, will fight May 14th for an opportunity to compete in next season’s 170lb. tourney. (Pictured: Good (left) and Hornbuckle)

“Good vs. Hornbuckle is a fight a lot of MMA fans, myself included, have wanted to see for quite some time,” said Bellator Chairman and CEO Bjorn Rebney. “These two guys have Bellator in their blood, and on May 14th one will move into our next Tournament and one will go home. This promises to be a great fight on May 14th at Caesars.”

Good (11-2) is coming off a split decision loss to accomplished Judo competitor Rick Hawn at Bellator 39 earlier this month, after battling to a unanimous decision win over Chris Lozano in March. Prior to that, at Bellator 33 last October, Good lost the welterweight title by UD to current champ Ben Askren.

“A lot of people didn’t know I had about a two week layoff before my fight with Rick because I got sick,” Good was quoted saying in the official announcement. “90 percent of a fight is always mental, and when I got in the cage, it never really felt like it was my fight.”

After carrying a six fight winning streak into 2010, Hornbuckle (22-4) has dropped two of his last three bouts, with losses coming by unanimous decision to Askren, and more recently, Brent Weedman. The Sengoku vet scored a decision win over Brad Blackburn in between the defeats.

“There’s no excuse for my loss to Brent Weedman,” said Hornbuckle. “It’s my fault for not pulling the trigger. I can only be mad at myself for not taking the opportunity to finish the fight. No more of that. This fight with Lyman [Good], the proof will be in the pudding – mark my words. Just watch, as soon as that bell rings, I’m going to be sprinting dead at him and I’m going to put my knee dead in his face.”

Bellator 44 will be hosted by Caesars in Atlantic City, New Jersey and will be broadcast live on MTV 2. The card will be headlined by a non-title bout between middleweight champ Hector Lombard and veteran Falaniko Vitale.

The lightweight tourney championship bout between Michael Chandler and Patrick Freire will also take place on the card.