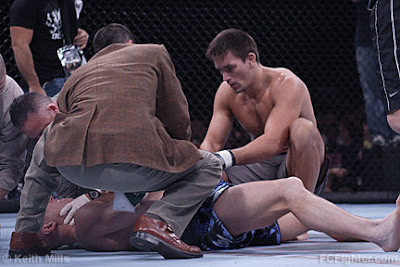 Only days removed from initial reports that Alan Belcher will no longer be able to fight Demian Maia, September 15th, due to a detached retina, Maia has announced on his official Twitter account that he’ll now face Mario Miranda on August 28th. The post on Maia’s Twitter page stated:

Maia (12-2) will be fighting for the first time, since the legendary jiu-jitsu competitor lost by Unanimous Decision, to middleweight champ Anderson Silva at UFC 112. Since signing with the UFC, Maia has gone 6-2, with wins coming over Dan Miller, Ryan Jensen, Jason MacDonald, Ed Herman, Nate Quarry and Chael Sonnen. The Brazilian’s only other loss, a quick KO at the hands of Nate Marquardt, took place last August.

Miranda (10-1) is coming off a dominant TKO victory over David Loiseau at UFC115 in June. In Miranda’s Octagon debut in March, he was stopped by Gerald Harris, handing him his only professional loss to date.

UFC 118, which will take place in Boston, Massachusetts, will be headlined with a rematch between lightweight champion Frankie Edgar and former champ BJ Penn.