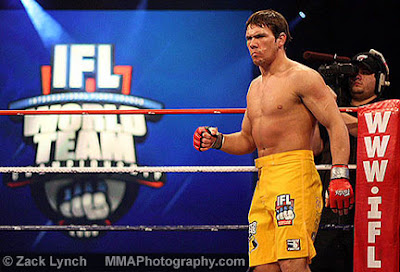 By Kelsey Mowatt   It’s a frustrating time in the career of Rory Markham, as after weeks of preparing for a fight with Steve Carl tonight in Kansas City, Bellator Fighting Championships announced earlier in the week that the punishing welterweight hasn’t been medically cleared to compete.
“The medical issue that caused me to not be cleared for the fight was due to having a bleb on my lung,” said Markham, who suffered a collapsed lung prior to his loss to Dan Hardy in February, 2009. “Basically it’s a small pocket of air between the tissue and lung itself.  Luckily it will not need surgery and I can get back at it within 6 weeks.”
After suffering from injuries throughout much of 2009, and then exiting from the UFC earlier this year with a 1-2 record, Markham (16-6) was eager to make a big splash in his Bellator debut.
“I am utterly disappointed because we as fighters train for so long and hard to fight, win, and get paid,” Markham told FCF. “To not have the feeling of victory after overcoming all the hardships of training is demoralizing. Yet the best fighters are made out of overcoming trials and tribulations. I will overcome this and remain optimistic.”
Kansas City’s Power and Light District will be the host venue for Bellator 26 tonight. Tyler Stinson agreed to step in for the injured Markham and fight Carl. Some of the other bouts scheduled for the event include
Mike Hayes vs. Alexey Oleinik, Jose Vega vs. Danny Tims,  and Lisa Ward vs. Aisling Daly.
The event will be broadcast live on Fox Sports Net.
posted by Full Contact Fighter @ 1:34 pm
Have a comment about this story? Please share with us by filling out the fields below.