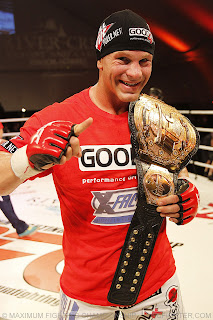 Ryan Jimmo continued to demonstrate why he is one of Canada’s top 205lb. fighters last night in Enoch, Alberta, as he stopped powerful striker Dwayne Lewis in the third round at MFC 28, to become the promotion’s light-heavyweight champion. (Pictured: Jimmo with the belt)
The accomplished karate competitor punished Lewis to the body and legs with hard kicks early on, before taking the fight to the mat in round three. From the top position Jimmo battered his opponent with punches, and although the resilient Lewis managed to escape, a massive and grotesque hematoma under his left eye left officials no choice but to bring the fight to a halt. There was some speculation afterwards as to whether or not the injury incurred as a result of a head butt or strike, but regardless, Jimmo was awarded his 14th straight victory.
In another of the card’s more notable bouts, veteran Drew Fickett made short work of Matt Veach, who had stepped in on short notice for MFC Lightweight Champion Antonio McKee. After the opening bell Veach immediately closed the distance and took Fickett to the mat, but soon found himself tapping to a beautifully executed armbar just 36 seconds in.

Team Quest lightweight Richie Whitson extended his winning streak to five by scoring a split decision victory over Curtis Demarce. Early on, it looked as though Demarce would pull out the win as he battered and bloodied Whitson with strikes. Whitson absorbed the punishment, however, and continued to pursue Demarce throughout the fight, eventually taking his opponent to the ground to score strikes from above. In the end, two of the three judge’s scored the thrilling and competitive bout for Whitson, handing him his 11th pro win.