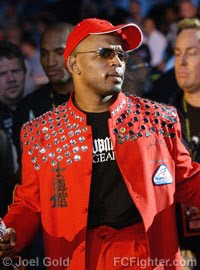 By FCF Staff   Bellator Fighting Championships has confirmed several more match-ups for the promotion’s upcoming event, Thursday night, at the historic Chicago Theatre. Among the additions for the card is UFC veteran Shonie Carter (49-24-7), who will face Torrance Taylor (8-7-1) in a welterweight attraction.
Carter will be looking to end a three fighting losing streak; the charismatic veteran is coming off a stoppage loss to Rick Hawn at a Triumph card in July. Taylor is 2-3 in his last five bouts; most recently he lost by Split Decision to Glen Brown at a UMMAXX card in March.
Other bouts that have been confirmed for Bellator 25 include: Kevin Knabjian (10-4) vs. Brian Gassaway (28-19), John Kolosci (14-6) vs. Kenny Robertson (9-0), and Keoki Cypriano vs. Eric Kriegermeier.
Bellator 25 will feature action in the opening round of the promotion’s heavyweight tournament as Damian “The Polish Pitbull” Grabowski (12-0) will take on Scott Barrett (10-1), and Rogent Lloret (9-1-1) will fight Cole Konrad (4-0).
In other confirmed fights, Zoila “Warrior Princess” Frausto (7-1) will face Jessica Pene (7-0) in an opening round bout from the women’s 115lb. tourney, while veterans Dan Hornbuckle (21-3) and Brad Blackburn (17-11-1) will square off in a non-tourney welterweight tilt.
Bellator 25 will be broadcast live on Fox Sports Net.
posted by Full Contact Fighter @ 12:33 pm
Have a comment about this story? Please share with us by filling out the fields below.