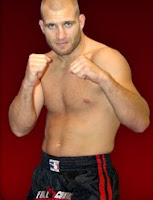 On this episode of Full Contact Fighter Radio, host Jeff “Wombat” Meszaros and co-host James Kellaris review two shows, starting with “Strikeforce: Henderson vs. Babalu 2” where Dan Henderson knocked out Renato “Babalu” Sobral just like we knew he would. Also, Paul Daley was able to knock out Scott Smith just like we feared he would, and Robbie Lawler nearly killed Matt Lindland just like we suspected he would.  Then again, Mike Kyle nearly knocked out Antonio “Bigfoot” Silva and we didn’t see that coming at all. Tune in and hear exactly that, but with much more humor and intrigue; plus a few poorly-researched details.

Then, hang around as we skip over to talk about The Ultimate Fighter Finale, where Jonathan Brookins was able to out-point Micheal Johnson in a match that literally no one is talking about, after a season of The Ultimate Fighter that nobody seemed to care about, including us.  What we do care about, however, is how the sport in nose-diving into and abyss of nonsensical decisions thanks to a crew of judges who we can only assume have the approximate wisdom of chimpanzees when it comes to an overall ability to understand who won and who lost a fight.  Catch the rant, then stick around for further ranting as we run down the rest of the fights on the card.

Like that’s not enough info-tainment for the show, we also preview the next UFC, where welterweight champion Georges St. Pierre is geared up to defend his belt against the uber-heel Josh Koscheck.  What’s going to happen there?  What about the rest of the card?  We’ll run it down for you.  Then, wait a second, we’re not done?  No, as Joe “El Dirte” Doerksen comes by to talk about his fight on the card against Jim Miller and share his thoughts on the main event, his last fight and how he’s trained for his latest fight in the UFC. Whew!  That’s a show so entertaining, it should come with a cold glass of water you can throw in your own face if you get too riled up.