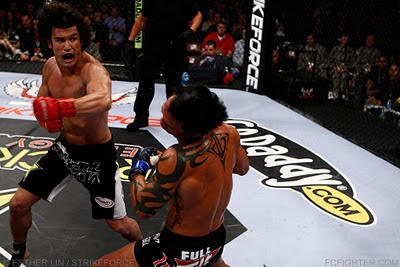 By FCF Staff    Following his stoppage victory over Jorge Gurgel last weekend, KJ Noons stated that he was more than willing to face Strikeforce welterweight champ Nick Diaz for a second time, and today the promotion has confirmed that the two will meet again, October 9th. (pictured above: Noons rocking Gurgel at “Strikeforce Houston”)
Noons and Diaz have feuded publicly ever since the two fought for the first time in November, 2007, including an in-cage incident in June, 2008, that saw each fighter’s camp nearly come to blows. In their first meeting at Elite XC’s “Renegade” card, Diaz was not allowed by doctors to continue into the second round, due to the cuts Noons had opened over the veteran’s eyes.
Diaz (22-7) has gone on to win 7 straight bouts since the loss, and is coming off a first round, submission victory over Hayato Sakurai in May.
Noons (10-2), who was the 160lb. champion with the now defunct Elite XC, has also gone undefeated since their first fight, winning four straight bouts.
The championship bout will headline the October 9th event, which will also feature Strikeforce Women’s Welterweight Champion Sarah Kaufman versus Marloes Coenen.
The event, which will be hosted by San Jose’s HP Pavilion, will be broadcast on Showtime.
posted by Full Contact Fighter @ 2:31 pm
Have a comment about this story? Please share with us by filling out the fields below.