By FCF Staff     The Ultimate Fighting Championship has officially confirmed the Octagon return of Yves Edwards, as a lightweight bout between the accomplished veteran and John Gunderson, has finally been added to the line-up for the September 15th UFC Fight Night card in Austin, Texas.
Edwards (38-16-1) will fight under the UFC banner for the first time since July, 2006, when the American Top Team fighter lost by TKO (doctor stoppage due to a cut) to Joe Stevenson. Since then Edwards has gone 7-5 fighting for a host of promotions, including BodogFight, HDNet Fights, Elite XC, and Strikeforce amongst others. Most recently, on August 12th, Edwards (pictured left) worked his way to a Unanimous Decision victory over Luis Palomino at Bellator 24.
Gunderson (23-8-1) has gone 1-1 since signing with the UFC earlier this year, losing by Unanimous Decision to Rafaello Oliveira in January, before earning his first Octagon win in June via a UD victory over Mark Holst. The International Fight League veteran is 4-1 in his last five fights.
The upcoming UFC Fight Night card, which will be hosted by Austin’s Frank Erwin Center, will be headlined by a middleweight bout between Nate Marquardt and Rousimar Palhares. The event will be broadcast live on Spike TV. 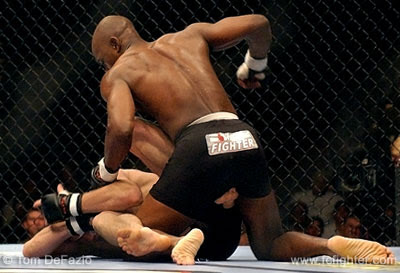