In 2005, Spike TV took a gamble of epic proportions by bringing Mixed Martial Arts programming on board its cable television network.  Prior to their crap shoot, the TV industry wouldn’t dare touch the sport that was still widely perceived as “human cockfighting” thanks to the 1990’s crusade of Senator John McCain to outlaw it, and despite the tireless efforts made by Zuffa, LLC to clean up MMA’s image since it purchased the Ultimate Fighting Championship (UFC) in 2000 from creators.

With cameras documenting 16 fighters’ every move over the course of 12 weeks while they lived together in a Las Vegas house a la MTV’s “The Real World,” MMA, with UFC as its face, hit the big time, making substantial inroads to mainstream American households.  A classic battle between Forrest Griffin and Stephen Bonnar on the finale of The Ultimate Fighter on April 9, 2005 was just icing on the cake.

Six years later, though, the magical matrimony between UFC and Spike TV, is in jeopardy.  The television contract between the two expires at the end of 2011 and there’s major buzz behind the scenes at both companies as well as amongst MMA insiders that the UFC and Spike which, together, help create an MMA revolution and transform the public’s perception of MMA, will part ways.

A break-up between the two would be the latest seismic shift in the world of MMA, at a time when UFC has at least temporarily eliminated all of its competition by purchasing it. 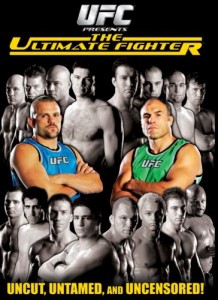 In 2005, the first season of The Ultimate Fighter on Spike TV was a landmark stride for MMA and the UFC

Spike TV is not revealing any specifics about the contract negotiations between the two organizations.   Company officials said they are focused on Season 14 of The Ultimate Fighter, which premieres this fall and is headlined by UFC stars Michael Bisping and Jason “Mayhem” Miller, who will coach opposing teams of fighters.

After that, they aren’t making any promises about future UFC programming. Spike is committed, however, to staying in the MMA business.

“Spike TV sees the value of the sport as a growing sport and as a sport with a tremendous fan base,” said David Schwarz, a spokesman for Spike TV. “This sport is on the rise.”

Schwarz said Spike TV believed in MMA in 2005 and will continue to support the sport.

“We have a great deal of respect for our fans and we will do our best to put on the best programming for them,” Schwarz said.

The Ultimate Fighter: Ratings  On The Decline

The television landscape has certainly changed. In 2005, the traditional reality series style programming which, in this case, documents the drama and emotion of young men living in close quarters, made for good television. But after 13 seasons, two a year, the appeal of watching fighters get drunk and act out amongst each other has worn thin.

Even a season headlined by former WWE champion and UFC champion Brock Lesnar couldn’t revive sagging ratings for the show.   The show peaked with 2.9 million average viewers in Season 10, when famed Internet brawler Kimbo Slice was a contestant.  Season 13, with Lesnar as the headliner, dropped to season 8 levels. (see below chart: The Ultimate Fighter –Average viewership, season-by-season, on Spike TV)

Despite his lack of professional fighting experience, “Kimbo Slice” (center) was a driving force behind record ratings for The Ultimate Fighter Season 10. As a result of his star power, Slice was promoted just as heavily by Spike as UFC superstars and Season 10 coaches “Rampage” Jackson and Rashad Evans

In 2005, then-unknown fighters such as Chris Leben and Josh Koscheck didn’t fear how they came across on television.  They had little idea what they were getting into and that MMA was about to take off. Now, the new fighters on the show typically play it safe and avoid the immature behavior that often makes for good television.

Could Bellator replace UFC on Spike?

At the same time that the UFC’s signature show has fizzled, a different MMA organization, Bellator Fighting Championships, has experienced a respectable rise in popularity thanks, in part, to a three-year live event programming deal with MTV2 that began earlier this year.

Last Wednesday, MTV announced in a press release that MTV2, established in 1996, posted its highest-rated quarter in the channel’s history, thanks in part to the viewership impact of the 11 Bellator events that have aired on the network thus far.  According to the press release, MTV2, which is available in approximately 80 million homes, experienced a 14 percent increase in total viewership from second quarter 2010 as well as an 11 percent increase in the key 12-34 year old demographic during the same time period.

Still, the promotion, which launched in 2008, is light years behind the UFC machine in terms of being an established, recognizable brand.  Its live event viewership on MTV2 is a fraction of that generated by any UFC live event telecast or episode of The Ultimate Fighter on Spike as well as the top rated UFC Pay-Per-Views. (see below chart: Bellator Fighting Championships – Average viewership, event-by-event, on MTV2)  It’s highest rated show to date, Bellator 44 on May 14, generated an average of 325,000 viewers.

Bellator suffers from a lack of household names on its fighter roster and, thus, cannot realistically be considered a legitimate number two promotion as Strikeforce was before UFC acquired it in March.

There is talk that if Spike and UFC aren’t able to agree to terms, though, that Spike is poised to bring Bellator on board its ship. Viacom, which owns Spike and MTV2, would simply move the show over from one cable station to another.

“Our sister network has experienced great success with Bellator on MTV2,” Schwarz said.

UFC has, for some time, been rumored to want to start its own cable channel.  Recently, news broke out about a possible UFC equity stake purchase in G4, a cable and satellite network owned by Comcast.

Jumping networks or staying on Spike isn’t as simple as it seems.

Although the UFC has experienced a rapid growth in popularity similar to the WWE in the mid 1980s, UFC has turned away television deals if it felt they weren’t good company.

UFC isn’t going to give up its production rights to its television shows or negotiate a contract that doesn’t offer a maximum financial benefit to the company.

Spike TV, likewise, isn’t going to give up its foothold in the sport, or underestimate its own value in the sport’s rise.

There is a proven appetite for MMA fighting other than UFC. Strikeforce was soaring on Showtime and about to move into the world of Pay-Per-View, before UFC purchased the company.

“We were the first television network in North America to air live mixed martial arts fights,” Schwarz said. “We took a chance on the UFC. The last 13 seasons have been beneficial to both brands.”

*ratings compiled from The Nielsen Company