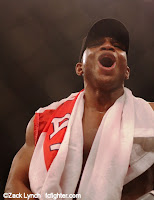 By FCF Staff   Less than six months have passed since Paul Daley stunned the MMA world by sucker punching Josh Koscheck following their UFC 113 bout in May, and as many predicted, the controversial and talented welterweight has had little trouble finding work outside of the UFC. The Texas based Shark Fights promotion has announced that Daley will fight Jorge Masvidal at its upcoming September 11th in Amarillo, which will mark the British fighter’s second bout since he was fired by Zuffa earlier this year.
Last month, at an Impact Fighting Championship event in Australia, Daley (24-9-2) returned to action for the first time since his aforementioned dismissal and stopped Daniel Acacio in the third round. The win was Daley’s fourth in five fights, a stretch which has seen the veteran also earn wins over Martin Kampmann, Junior Barata and Dustin Hazelett.
Masvidal (20-5) is coming off a Split Decision victory over Naoyuki Kotani in April, which took place on Astra’s, Hidehiko Yoshida farewell card in Japan. The American Top Team fighter is 3-2 in his last 5 fights, with his other wins coming over Satoru Kitaoka and Eric Reynolds, and losses incurring versus Eric Reynolds and Toby Imada.
Shark Fights 13, which will be hosted by Amarillo’s Civic Center Coliseum, will be headlined by a light-heavyweight tilt between Keith Jardine and Trevor Prangley, and will feature several other notable match-ups including Thierry Rameau Sokoudjou vs. Houston Alexander, Joey Villasenor vs. Drew McFedries and Aaron Rosa vs. Dave Herman.
The event will be available on pay-per-view.
posted by Full Contact Fighter @ 1:00 pm
Have a comment about this story? Please share with us by filling out the fields below.