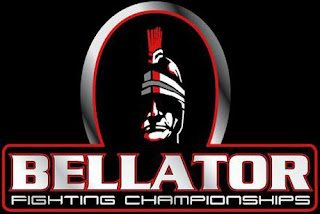 By FCF Staff    Bellator Fighting Championships has announced that the promotion’s Season 2 open try-out winner, Tyler Stinson, will fight Steve Carl instead of Rory Markham, August 26th. According to a press release sent out by the promotion today, Markham was not medically cleared to compete on Thursday’s card, which will take place in Kansas City. Markham could not be reached by FCF for comment.
Stinson (18-6) last competed under the Bellator banner in June, when he tapped out Leonardo Pecanha in the first round with a rear-naked-choke. Carl (10-2) is coming off a submission loss to Dan Hornbuckle in May (who also tapped out Stinson in April); prior to that the welterweight scored a Split Decision victory over Brett Cooper at Bellator 15.
“Tyler’s skills and development as a fighter have consistently impressed me.  He was preparing for a qualifier scheduled a month from now, but Tyler is always in fighting shape and was totally prepared to take this fight,” Bellator Chairman and CEO Bjorn Rebney was quoted saying in a press release from the promotion. “Both of these guys have put on great fights for us and I expect nothing different on Thursday night.”
This Thursday’s Bellator 26 card will be broadcast live on Fox Sports Net.
posted by Full Contact Fighter @ 3:37 pm
Have a comment about this story? Please share with us by filling out the fields below.