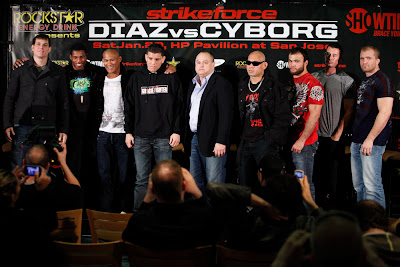 Several of the competitors for Strikeforce’s “Diaz vs. Cyborg” event Saturday night were on hand at a pre-fight presser in San Jose, yesterday, to share their thoughts about the upcoming card.. The event, which will be broadcast on Showtime, will feature not one but two title fights, as welterweight champ Nick Diaz will take on Evangelista “Cyborg” Santos and current middleweight king Ronaldo “Jacare” Souza will face Robbie Lawler.

Rounding out the main card will be a bout between renowned BJJ practitioner Roger Gracie and Trevor Prangley, while NFL legend Herschel Walker will compete in his second, pro MMA bout against Scott Carson. Here is some of what Saturday’s competitors had to say about their upcoming fights.

“I feel good and I’m ready to fight. Cyborg has a unique style and I know that he will give it his all and be as crazy as ever. But that’s good because I’m crazy, too.

“I have great respect for Cyborg. He is strong and has skills and comes real hard. I feel he deserves a shot.

“After 15 years of training and sacrificing, my dream is finally almost here. I am very excited at the chance to make my mark. I can promise you I will do my best to pull out the win.

“Nick Diaz is a very gallant fighter but I will press the action whether we are standing or on the ground.

“I am not worried about those who underestimate me in this fight. I am pre-occupied with winning.

“The belt always equals a build-up to your career, but first you have to win it. I feel strong and very comfortable at 170 and looking forward to a great fight against Nick Diaz.’’

“This is going to be a tough fight, and a very dangerous one. Robbie Lawler is very heavy-handed and I know to win I am going to have to play my game, which is to take him down and try and finish the fight.

“Some were surprised that I stood last time but Lawler is a different kind of fighter than I had in my last one. If I have to stand, I will, of course, but I know it is important that I keep control.

“I don’t feel either of us think that we can afford to make a mistake.’’

“I work on all my skills all the time. Guys are so good at this level. Make a mistake and it will cost you.’’

“The Herschel of today would have beaten up the Herschel of a year ago. I was dumb and naïve when I first started. But I have learned a lot.

“This will be a good fight. Scott Carson has a lot of experience. I am looking forward to fighting again for Strikeforce and on Showtime.’’

“I feel fortunate to get this fight and I hope to make the best of it. I’m definitely prepared and ready for a fight.

“Fighting such a legendary name has certainly added a lot of hype to the fight, but I have worked very hard in training camp. I’m looking to see this fight go into the later rounds where it will be a war of attrition.’’

“Even though each fight is different, I treat them all the same in my approach. All fighters are dangerous. I am in with a good, very experienced fighter so I do not expect him to make any silly mistakes. I know I must be patient because he is very heavy-handed.

“I have worked very hard for this fight and am excited about fighting on a Strikeforce show on Showtime. I want to be more active in MMA and hope to fight two or three times this year.’’

“I think this is going to be a great chess match. Who can implement their game plan best will win. I want to fight my fight.

“I had a great camp and feel comfortable. We’ll see how it goes.’’