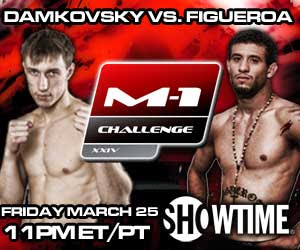 M-1 Global has confirmed the undercard line-up for the promotion’s M-1 Challenge “Damkovsky vs. Figueroa” event this Friday in Norfolk, Virginia. The March 25th event, which will be broadcast on Showtime, will feature a lightweight bout between champion Artiom Damkovsky and challenger Jose Figueroa.