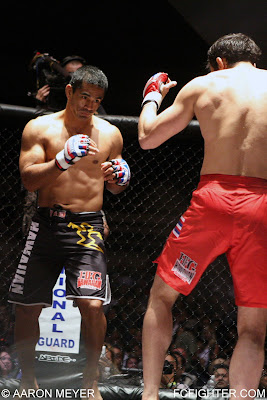 X-1: Champions 3
Blaisdell Arena, Honolulu, Hawaii
March 12, 2011
By Chris Onzuka, photos by Aaron Meyer The last surviving large MMA promoter in Hawaii, Mike Miller, has done it again with his “Champions” series of events.  It is an X-1 event featuring a fight card consisting of every match being a title fight.  Fighters are either defending their title or fighting for a title.  Sometimes champions get in a mode of working to keep their title instead of looking for a dominating performance where they attempt to finish their opponent; this was NOT one of those nights.(Pictured: Vitale and Clay (right))

Raquel Paaluhi returned to action after her first lost via submission and went up against another grappler in Nicole Johnson.  This was an important match for Paaluhi on two counts, one to see how she bounced back after a loss and second how she would fare against another good grappler.  Paaluhi came through with flying colors, landing hard straight right hands and fighting smart on the ground, wearing down her opponent before going in for the finish.

The only fight that was not a title fight was a bantamweight fight with number one contender, Van Oscar Penovaroff scheduled to fight champion, Russell Doane.  However earlier this week, Doane was involved in a six car accident and had to pull out of the fight.  However, Waianae Boxing Club brought in one of their scrappers in Thomas Matias to fill the void.  Matias ignited the fire within Penovaroff with the exchange of some words between fighters.  At the opening of the bell, the entire crowd knew that this fight would not end in a decision; there was way too much fire in the cage.  Penovaroff has been adding to his top notch boxing skill set since facing an improving level of grapplers.  After gaining an edge in the striking area, Penovaroff decided to showcase his added skills by choking out Matias.

Eben Kaneshiro vied for Ricky Wallace’s featherweight title and brought more heat to Wallace than he has seen in a while.  Wallace has dominated his class to win the featherweight title in two organizations.  Kaneshiro, a BJJ black belt and MMA veteran, was in the position to finish Wallace at the beginning of the fight, but Wallace’s displayed great defensive skills when Kaneshiro was on his back and attempting an arm lock.  Kaneshiro then surprised Wallace by standing and trading with Wallace.  After landing his devastating spinning back elbow, Kaneshiro dropped Wallace and unloaded on him at the end of the first round.  Experienced Referee Chris West was very aware of the time left in the round and the warrior that Wallace is.  Wallace stumbled back to his corner, but at the start of the second round, Wallace looked fresh and Kaneshiro came out tired.  However Kaneshiro pressed the action and looked to finish what he started in the prior round, but he emptied his tank and Wallace came back with a vengeance and dropped Kaneshiro with a body blow and ended up finishing him in the most exciting match of the night.

Arguably Hawaii’s fastest rising star Max Holloway took on one of Hawaii’s most experienced and well rounded veterans in champion Harris Sarmiento.  As expected this was a stand up war with both fighters presenting interesting challenges and styles to their opponents.  The tide of the fight went back and forth with Holloway showcasing a variety of different attacks and Sarmiento looking to counter.  In the end, it was a close fight with Holloway earning the nod from two of the three judges to capture the title.  Holloway has only had a handful of MMA fights and at the tender age of 19 years old represents the new breed of fighters that grew up with MMA.  The sky is the limit for this young man.
In the main event, the welterweight champion, Dylan Clay, went up in weight to challenge the middleweight champion, Falaniko Vitale.  It was difficult matching up these two fighters so they decided to fight each other.   Clay started out with his Muay Thai and Vitale stayed cautious and looked for openings.  Vitale closed the distance with strikes and fought off the clinch to stay out of Clay’s strong point which is his grappling.  Vitale landed some over hand punches and set up and landed a powerful uppercut that knocked Clay out cold.  It knocked him back and had him propped up sitting up against the cage while being knocked out, bringing a great event to an exciting end.  Props go out to Clay to making the fight happen and taking on the tough Vitale, who is scheduled to fight in Bellator.
X-1 Heavyweight Amateur Championship
Paea Pongo def. Kala Koa (Maui)
TKO after the end of Round 2 (Koa did not answer the 3rd round)
Paea Pongo becomes the new X-1 Heavyweight Amateur Champion.