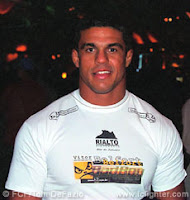 By FCF Staff    Vitor Belfort has confirmed, that as expected, he will face fellow middleweight contender Yushin Okami, at UFC 122, November 13th in Oberhausen, Germany. The following statement appeared on the fighter’s official Twitter page earlier today.
“Now it’s game time we have a fight nov 13 against okami”
Belfort (19-8) has not fought since last September, when in his Octagon return he stopped former champion Rich Franklin in the first round. The renowned striker had been set to face middleweight champion Anderson Silva in April, but a shoulder injury and subsequent surgery forced Belfort to the sidelines. Heading into UFC 122 Belfort has won 5 straight fights.
Okami (25-5) has won back-to-back fights over Lucio Linhares and most recently Mark Munoz, since losing by Unanimous Decision to current, number one contender Chael Sonnen last October. The powerful Japanese fighter has gone 9-2 in the UFC to date.
It’s expected that the winner of the Okami / Belfort tilt, which has yet to be officially confirmed by the UFC, will secure a title shot. UFC 122 will be broadcast on Spike.
posted by Full Contact Fighter @ 12:37 pm
Have a comment about this story? Please share with us by filling out the fields below.