White Says Rematch Between Silva and Sonnen in the Works 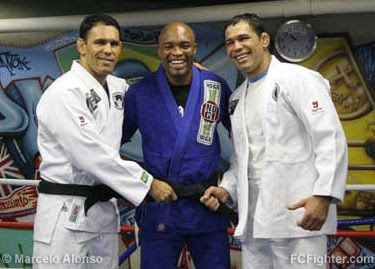 By Kelsey Mowatt    While appearing on ESPN’s Sports Center, UFC President Dana White has confirmed that he is “looking towards” an immediate rematch between middleweight champion Anderson Silva and challenger Chael Sonnen. While discussing this weekend’s upcoming UFC 118, White acknowledged “that’s the fight that fans want to see. The way that I see my job is my job is to give the fans what they want,” when asked if Sonnen would indeed receive an immediate rematch. (pictured above: Silva with his BJJ instructors, the Nogueira brothers)
No date was mentioned for the fight, although it is widely expected that Silva is several months away from returning, due to a rib injury the champion incurred while preparing for his August 7th bout with Sonnen. After being dominated by Sonnen throughout their memorable bout at UFC 117, Silva caught the number one contender with a late, fifth round triangle choke, to win his 13th straight fight.
White also confirmed that light-heavyweight champion Mauricio “Shogun” Rua will face Rashad Evans in his first title defence, when he returns from knee surgery in mid-spring, early summer.
posted by Full Contact Fighter @ 12:54 pm
Have a comment about this story? Please share with us by filling out the fields below.