Winner of Alistair Overeem vs. Brock Lesnar to Challenge for Title 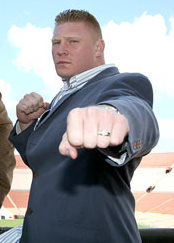 The stakes in Alistair Overeem’s first Octagon appearance will be considerable, as the Ultimate Fighting Championship has confirmed that the fighter’s December 30th bout with Brock Lesnar, will determine who is the heavyweight division’s number one contender.

Although it’s been suspected for sometime that the victor of the upcoming, five round UFC 141 bout could move on to challenge for the title, the promotion and its President Dana White have now confirmed the bout’s title shot implications.

Lesnar (5-2) has not fought since he was stopped by current champion Cain Velasquez last October,  after tappiong out former contender Shane Carwin in July, 2010. The former champion had been scheduled to fight Junior dos Santos in a number one contender bout this past June, until another bout of diverticulitis forced Lesnar’s withdrawal.

Overeem (35-11) is coming off a unanimous decision win over Fabricio Werdum in June to extend the former Strikeforce champion’s undefeated streak to 11. The renowned striker and former K-1 champion has not lost since 2007, when he was knocked out by Sergei Kharitonov.

Velasquez will fight dos Santos at the UFC on FOX card this Saturday in Anaheim. The winner of that fight will move on to face the winner of the Overeem, Lesnar bout sometime in the new year.